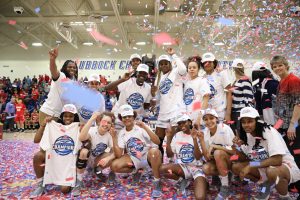 LUBBOCK, Texas – At some point this season, once all the repairs from Hurricane Michael are completed at Billy Harrison Field House, they will hang another banner honoring the Gulf Coast State College women’s basketball program.

This one, however, will have special meaning for the Commodores, in as much as it was their goal to not only win a national championship, but to honor the city that embraced them after the death of a player just a few weeks before the storm that devastated the Florida panhandle.

Alexus Dye scored 14 points and grabbed 12 rebounds to earn tournament most valuable player, and Gulf Coast captured its sixth straight national championship with a 68-62 victory over New Mexico Junior College on Saturday in the NJCAA Division I Women’s Basketball National Championship at the Rip Griffin Center.

“It means a lot because we’ve been through a lot and we’ve worked hard,” Dye said. “I think we worked harder than any other team, and we do deserve this an we got it. We were very hyped, came out on a mission to win and we did it.”

The Commodores (27-5) did it by using their length, 3-point shooting and tremendous defense to power past the Thunderbirds (29-6) in the first quarter and never look back. It is the third national championship for Gulf Coast in the last four years, but after all the adversity faced by the program over the last six months, it likely will mean the most.

“Just so happy for these kids,” head coach Roonie Scovel said. “They just rose to the challenge, they accepted everything that happened. It’s kind of amazing.”

Just as amazing as the start the Commodores got off to in the game.

Unlike the semifinal where they struggled out of the gate, the Commodores opened the game on fire and getting contributions from up and down the lineup. After the teams traded 3-pointers to open the game, Gulf Coast scored the next 15 points and finished on a 17-1 run to lead 20-4 with 2:43to play in the opening stanza.

Kincey, who had 18 points in the semifinal, picked up where she left off with a trey as part of her seven first-half points, and Naomi Mbandu and Brittany Davis added treys as well during the run. This all came after the Commodores missed their first four shots but finished the quarter hitting 10 of their final 18 shots in the period.

“It was beautiful,” Scovel said. “We knew there was TV, and we really stressed it before the game and even went in (the lockerroom) early and said make sure you don’t get caught up with the TV and not play Gulf Coast basketball and not play together, because that’s how we’ve won. And, man, we played together. It was beautiful in that first quarter.”

New Mexico, meanwhile, struggled to keep up. After a Jumee President 3-pointer from the to of the key at the 7:42 mark, the Thunderbirds would go 31/2 minutes without a point and 51/2 minutes without a basket until Amaya Lewis hit a layup with 2:16 to play in the period.

The Thunderbirds spent the rest of the game trying to chip away, but the Commodores rose to the challenge each time. Centers Eternati Willock and Sydnee Wynn had 20 and 16 points, respectively, to lead the Thunderbirds, but most of that came in the second half, while leading scorer Thamires Andrade was held to just two points, and that didn’t come until there was just 3:25 left to play.

“They came out and hit us right off the bat and hit a bunch of threes, and our kids played tight and intimidated early,” NMJC head coach Drew Sanders said. “Then we got behind, and our kids got out of sync. From that point on we could just never get that thing under 10 until late. You’ve got to give them credit because they knocked down a bunch of shots, some of them were contested, and then they were really, really physical and made it hard for us to get the ball inside.”

Conversely, Brittany Davis continued her hot hand with 16 points, including four 3-pointers and Naomi Mbandu added 12, and the Commodores outrebounded the Thunderbirds, 44-38.

Gulf Coast was closed to putting the game away early in the fourth quarter, but NMJC finally began to play its style of basketball. It could have been even better, though.

Down 58-40, the Thunderbirds went on a 13-2 run. The first part of that run included five trips to the free throw line, but NMJC hit just 5 of 10 during that stretch. But when Mayra Caicedo hit one of two free throws with 2:48to play, suddenly the Thunderbirds were the closest they’d been since four minutes into the game at 60-53.

Gulf Coast, however, answered with two straight layups, then Mbandu and Gaye put the game out of reach with four free throws in the final 27 seconds to seal the win.